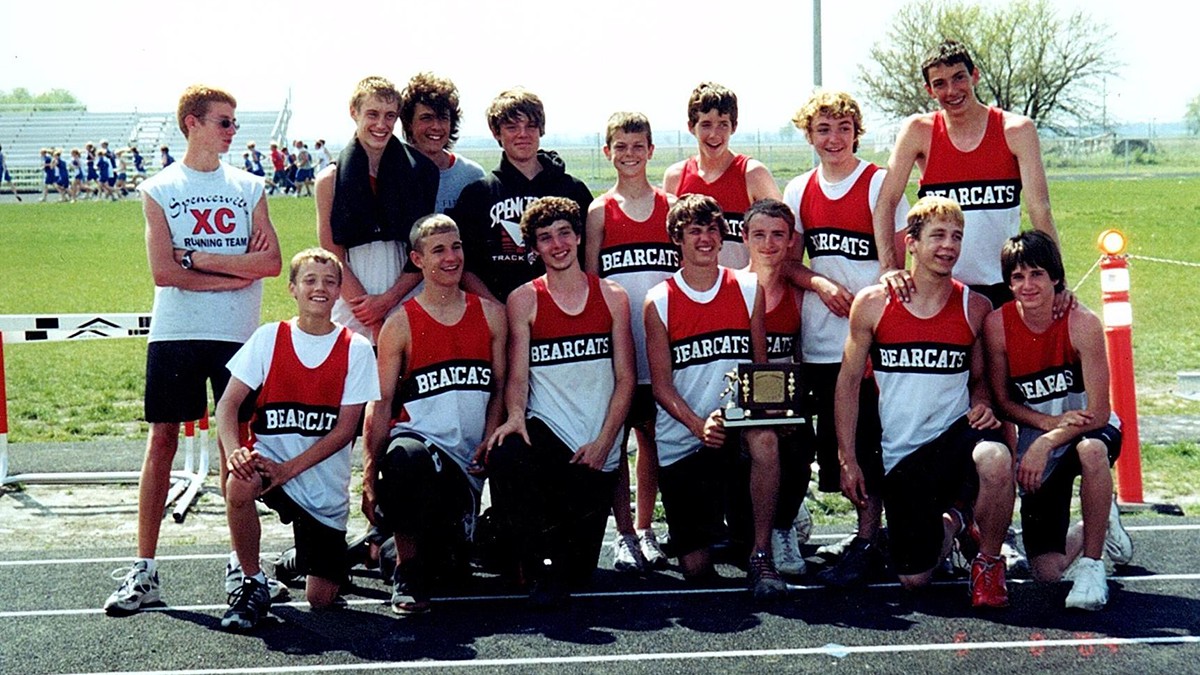 Luke Brenneman, in the middle of the back row, was one of the oldest on the track team, yet one of the smallest. (Photo courtesy Joanne Brenneman)

I have 30 years. I prefer the Spanish way of saying our age over the English way — maybe because I’ve looked significantly younger than I am for a couple decades. “I’m 30” pins too much of who I am onto something that people get wrong about me every time.

When I had 16 years, I looked like I had 11, according to peers who were usually nice about it but were unintentionally patronizing. Same for the endocrinologist who prescribed a drug to force hormones out of my pituitary gland. And then there is the photographic evidence.

I embodied what others saw — the “cute little brother” kind of friend whose jersey slid off his tiny shoulders. My body and mind weren’t mature enough to develop any other identity.

When I had 21 years, I looked like I had 17, but peers thought my defined abs and pecs made up for it, so I went all in, seeking this more appealing type of attention in some unhealthy ways.

I chose to embody who others saw me to be because it was a welcome 180 degree turn from high school — even though part of me knew it wasn’t good for my body or mind.

When I had 27 years, I looked like I had close enough to 21 to get carded at dinner during an interview for an assistant professorship before the full hiring committee. By this time I knew from experience that it was my responsibility to break the awkwardness with self-deprecatory humor, which inevitably elicited the classic, “You’ll appreciate it when you’re older!”

My mind was mature enough to accept how others saw my body and maneuver the consequences of their interpretations. But I still hated taking on the mental burden of the messages my body sent to others.

Now I have 30 years, and I’m prepared to get carded at happy hour for another decade or so. I’m still waiting for the “You’ll appreciate it when you’re older” phase promised over and over since I was 14 — the phase when I still look younger than I am but finally look old enough to meet others’ visual expectations of credibility without mentioning my expertise. I finished my doctorate 2 1/2 years ago, and I’m still mistaken for a student worker.

As I get older, I don’t think I’m going to care if I look younger or not. I hit puberty extremely late and have looked very young into adulthood, so I’ve been learning how to handle my mind/body relationship for awhile. I think it will translate to the next phase of aging, which will likely coincide with my body losing athleticism and adding aches and pains. That will matter more to me. I see people hitting 40, 50, 60, and so on while excelling in sports and trying new ones. I want to do that. Is my athletic ability going to function at a younger age like my appearance? If so, awesome. If not, what’s the point? 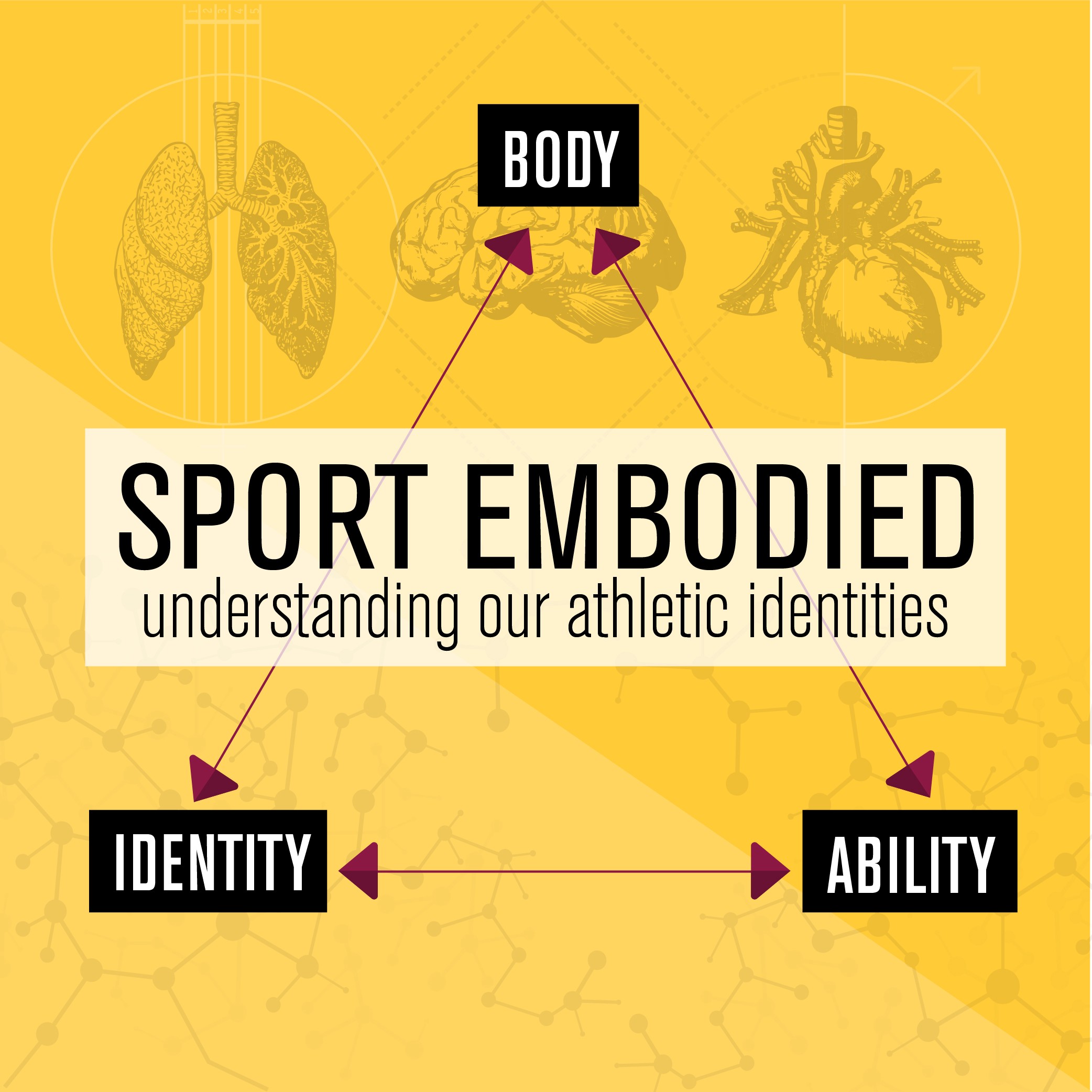 Let’s be clear — I’m a very privileged person who, outside of looking really young, has moved through life in an environment that’s felt natural because it was built for people like me, by people like me. Among other traits, I’m a white, highly-educated, straight, able-bodied, native English speaking male. My surroundings and I have fit like a glove, and I haven’t had to think about how to fit into a system that someone made without me in mind.

With the Global Sport Institute’s theme year of Sport and The Body, I’m taking on this new series and project that we’re collectively calling “Sport Embodied — Understanding Athletic Identity.” Along with what I discover about what I have outlined above, this project will include the perspectives and experiences of people for whom the system was not built. I’ll do this through the lens of sport and athletic ability.

Our bodies, our athletic abilities, and our identities all affect each other. Think about high school — kids’ playing time, statistics, fastest times all influence who they hang out with and date, what their hobbies and interests are and whether they’re recruited and offered scholarships. Their reputations, decisions, and perceptions of themselves are influenced by their athletic ability, which depends on their bodies. As part of this series and project, I’ll dig into how changes in my body led to stark changes in my identity, how others treated me, and how I exercised in college. 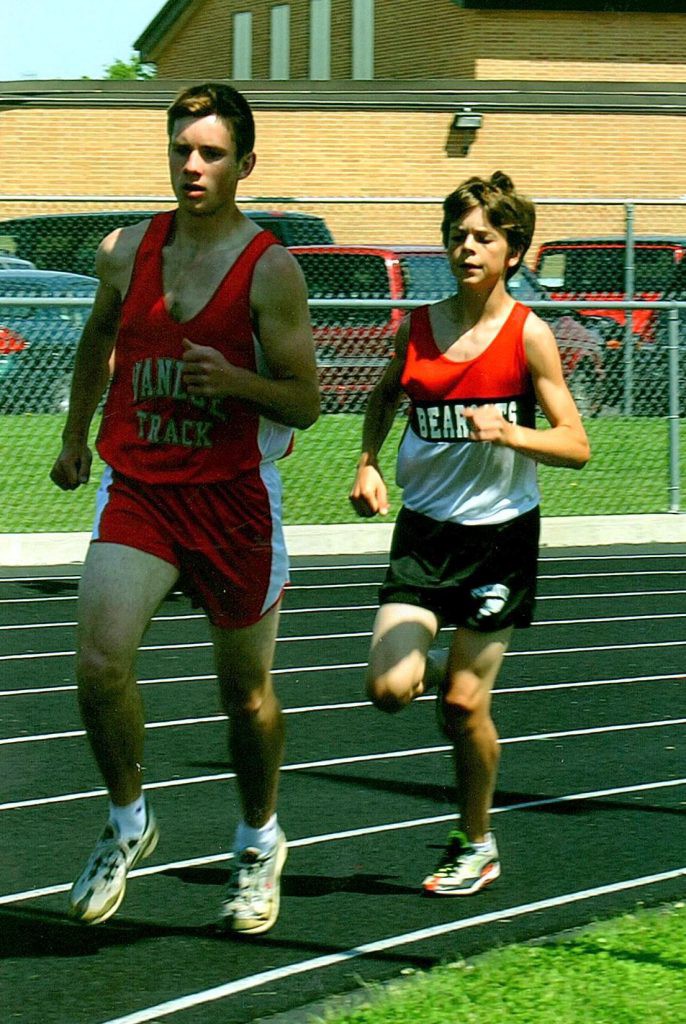 Luke Brenneman running track at age 16, clearly smaller than the other runners. Brenneman didn’t play contact sports because he was knocked around too easily. (Photo courtesy Joanne Brenneman)


My goal is to provide readers and listeners with insights rooted in real, relevant experiences (sometimes mine, sometimes those of others) informed by research and knowledge from various academic fields. For example, I’ll converge knowledge about why my 15-year-old pituitary gland was so late to the hormone game (endocrinologist) with expertise on how late-onset puberty affects a teenager’s mental health and identity (child development psychologist) with my experience of living it.

Throughout this exploration, I’ll write monthly articles, record podcast segments and post weekly insights on social media related to a series of topics. Here’s a preview of series topics:

I want this series to be eye-opening, intriguing, and most of all, useful.

I’m hoping that people whose bodies don’t fit the mainstream perception of what an athletic body looks like — some of whom I’ll be interviewing — will be able to use what they learn to improve the relationship of their bodies, athletic abilities, and identities. With that, perhaps the rest of us will better understand them and treat them more appropriately.

My 16-year-old self wanted to read and listen to something like this. So did his parents. He also wanted his well-meaning coaches, teachers, peers, and grandparents to read it so they knew what to do and not to do. My 16-year-old self wished that they knew I wanted to put my hand over their mouth whenever they were about to say, “You’ll grow soon!”

My 21-year-old self needed to hear why he valued the positive attention others heaped on his body, and how he let it define his identity and behavior in harmful ways. He also needed his friends to read something like this to notice his behavior and confront him about it.

My 27-year-old self was in a pretty healthy place but could have really used insight on how looking so young for so long led to feeling inferior among peers on and off the playing field, regardless of performance.

My 30-year-old self is excited to research, write, read, and hear all of it, because I know I’m far from a finished product. My body, athletic ability, and identity have a long way to go. I want to make sure they work together the best they can until I have at least 80 years — which is probably when I’ll finally look 30.

Luke Brenneman is a postdoctoral research scholar at the Global Sport Institute at Arizona State University and is conducting this project through the Global Sport Education and Research Lab.