More than T-shirts and hashtags: Measuring social justice impacts in the NFL 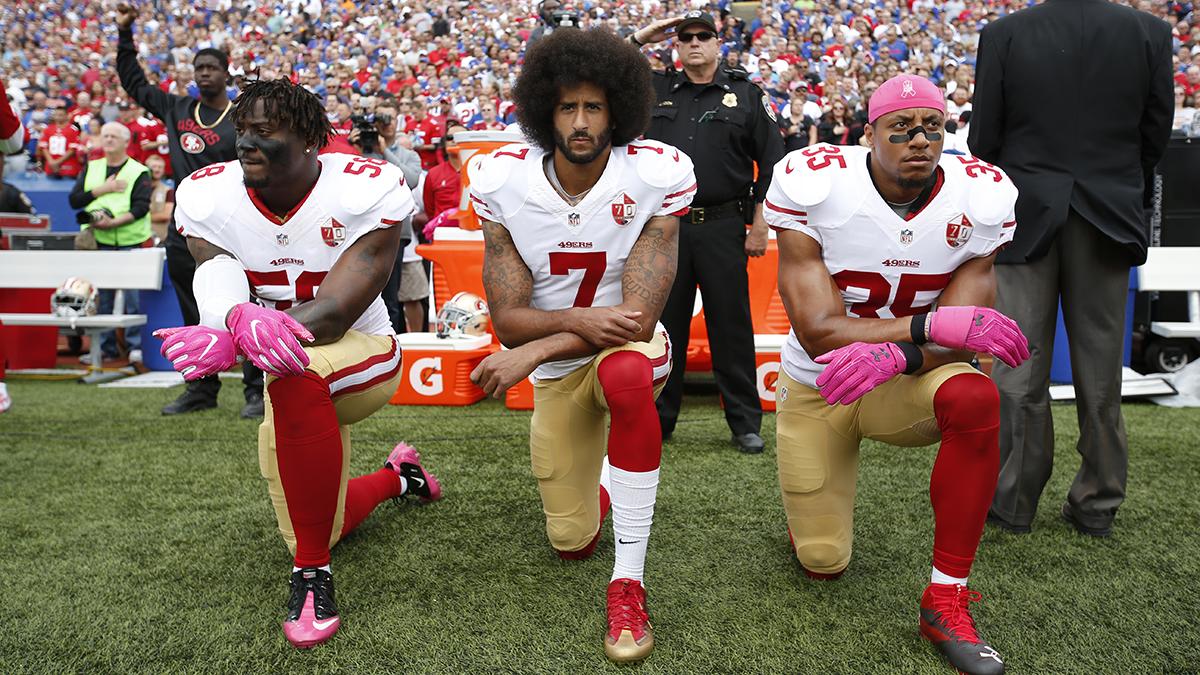 Eli Harold (left) Colin Kaepernick (center) and Eric Reid (right) of the San Francisco 49ers kneel in protest on the sideline during the anthem before a game in 2016. (Photo by Michael Zagaris/San Francisco 49ers/Getty Images)

As controversies regarding kneeling as a form of protest have receded from global headlines, little has been written about what those same athletes and organizations are doing now regarding the issues at the heart of the demonstrations.

At the Global Sport Institute at Arizona State University, we were curious about the actual impact the NFL was having in this “2.0” phase of athlete activism. We asked the NFL for, and received, internal reports on this activism. This represents our second report capturing the end-of-season detail – the first report was done at the NFL season midpoint. We hope we can do the same thing with other professional sports leagues.In the meantime, we are identifying other cases of social justice activities by athletes in the U.S. and abroad, historical and current, and are working on a more comprehensive report that highlights the convergence of sport and social issues and how athletes and sport organizations have been sites for challenges to social justice and active towards furthering social justice.

How we examined the issue

Beginning with information provided by the NFL, we searched for activity by players and clubs over the course of the 2017 and 2018 seasons, using our judgment regarding the social justice protests as the catalyst for the specific activities. We took that information and verified it via these online searches:

At the outset, we realized we would not be able to capture all that is being done because some activities may not have a public record. Some players, as is the case with many philanthropists, have contributed anonymously or quietly. They may have been actively involved in their community for some time, which makes it hard to separate social justice activity from overall activity and to pinpoint the social justice protests as the catalyst. In addition, we are unable to provide an accounting of funding because the dollar amounts are not usually reported and are not easily found through public record.What we found

There were eleven takeaways in our research.

Additional updates since the initial report

Where this leads us

By any measure, there has been an impressive record of activity – 417 verified activities with more we have yet to confirm.  The NFL as a community is engaged and socially involved in new ways, at multiple levels, and with greater dedicated resources. At the same time, there have been public rifts between players regarding how this has occurred. The recent firings of several African-American head coaches invites more criticism of NFL ownership and culture. Sport reflects society and what we have seen in the NFL over the last few seasons is the common tug-of-war of social movement – change doesn’t just happen and it doesn’t generally happen all at once – there are starts and stops, ebbs and flows, deserts and deluges. We don’t know how all of this will shake out, but movement is definitely occurring inside and outside sport.

With further analysis, we hope to look at the actual impact across sports as a whole and, if possible, make comparisons between leagues. WNBA players have perhaps been the beacon of unity with their team and cross-team organized protests before games and activities such as the Seattle Storm’s Planned Parenthood rally. In the National Women’s Soccer League, Megan Rapinoe offered an early gesture in support with NFL players.

We would be interested in tracking the additional activities Rapinoe and others, along with their clubs, have been engaged in. With the NBA, for example, LeBron James has been heavily involved in producing various media and building a school. There are other athletes, to varying extents, building hospitals abroad, funding schools and academies, and starting companies — in addition to running and funding charities. This would be a valuable and daunting task and could not be done effectively without the support of the leagues and their data, and/or athletes themselves.

We have used the resources of our Global Sport Education and Research Lab to begin this study, which will be ongoing. Download and read the full report here.

Kenneth Shropshire is CEO of the Global Sport Institute and serves as a consultant to the NFL on educational matters. The Global Sport Education and Research Lab is run by Scott Brooks, Director of Research, and staffed by Edwin Elias (post-doctoral researcher), Ian Rewoldt and Stacey Flores (graduate research assistants).