Today we salute one of the newest team members to join the Global Sport Institute. Dr. Gallagher is a U.S. Army veteran and a Tillman Scholar, whose work explores service-related conditions and transitions in military veterans. Her current research focus examines parallels between veterans and athletes in terms of wellness, cognition, and empowerment in the post-sport journey. 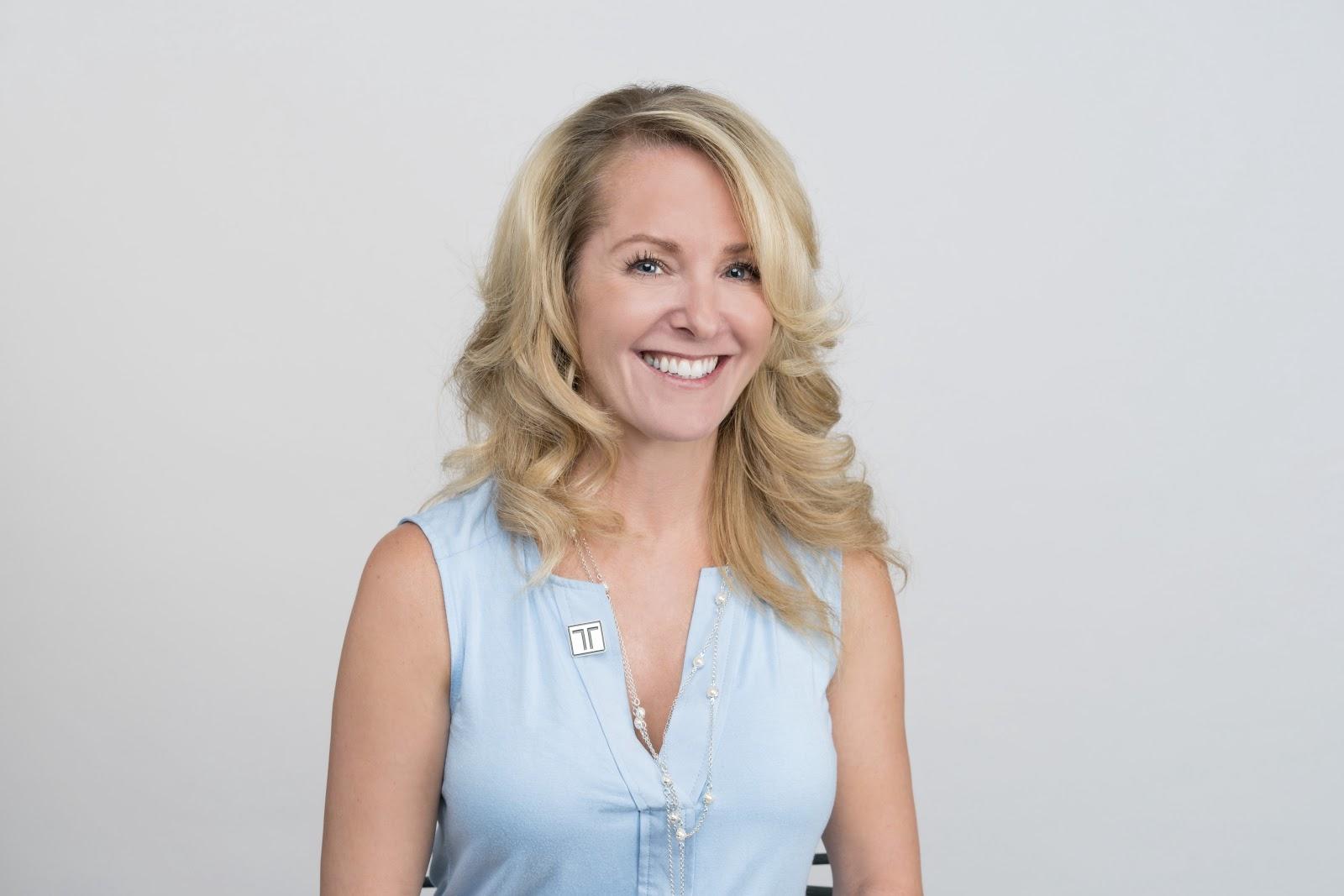 Tell us a little bit about yourself.

I was born and raised in Southern California and lived in Puerto Rico and England for a few years growing up. I secretly joined the army while finishing my senior year at an all-girls Catholic school, telling no one, not even my parents. After serving I lived in Washington, where I earned my B.S. and M.S. in speech-language pathology. I have been in Arizona for 13 years and earned my Ph.D. at ASU. I was named a Tillman Scholar in 2016. I am married and we have three grown sons who live to prank me. I love learning to play the ukulele and am an avid runner (I even quoted Steve Prefontaine in my wedding vows).

Tell us more about your research work, outside of Global Sport Institute.

I have practiced as a speech-language pathologist specializing in neurologic communication disorders for twenty years. My research has focused largely on service related conditions, such as mild traumatic brain injury, PTSD, transition, and the long — term impact on higher order cognitive processes in military veteran college students. My work has highlighted the insufficiencies in standard neuropsychological assessments for measuring subtle deficits that can significantly impact cognitive skills in demanding environments like the college classroom.

I continue to work on ecologically valid assessments for veterans and anyone who has long-term consequences of a mild traumatic brain injury or concussion. I also implemented an executive skills coaching program called Veteran Academic Strategy Training (VAST) to help veterans improve cognitive skills and implement effective strategies for transition, academic, and vocational success.

As a U.S. Army veteran, what can you share about your post-service journey that makes it unique?

After returning from war and pretty quickly entering college, I had a very difficult post-service journey. I felt lost and unable to relate to the college students around me. I had a very different life experience than these “kids” who were really not that much younger than me.

Being a female soldier, especially as a Paratrooper, I was very visible when I served. However, after service, like most female veterans, I felt invisible. I didn’t match the image of a “veteran” that is represented in the media or that fits most people’s descriptions of a veteran, which is mostly a male image.

In that first year, I often went days or weeks without really talking to anyone other than my family. I eventually managed to bootstrap my way to make connections with those around me and succeed academically. It was that process that inspired my research. When I stood on campus all those years later and watched the next generation of veterans start their civilian journeys, I saw the same look on their faces that I had on mine all those years ago. I really just wanted to find a way to make that transition better and easier than it was for me.

How did you learn about the Global Sport Institute at ASU, and about the role you are serving in?

I was introduced to the team at GSI by the Director of the Pat Tillman Veterans Center to talk about some projects and the potential for exploring overlap between athlete and veteran experiences. I have to credit the GSI team for matching my passion and excitement about exploring this mostly uncharted territory in really creative ways. We initially collaborated on a single project and when I finished my Ph.D., and then we saw an opportunity to expand this research collaboration. It’s centered around exploring the overlap in warrior and athlete experiences, and the post-sport/post-service journey to translate findings to better lives on a large scale.

Tell us more about the focus of your role with the Global Sport Institute and what inspired you to look further into the niche topic of empowerment in the post-sport journey?

There are very few careers or experiences in life that really define a person’s identity, their culture, their social system in the all-encompassing way that military service and elite-level sport do. When those experiences end, the athlete or warrior may not be prepared for the next phase of a second career and life outside of athletics. My role is to help establish some systems, resources, and support for improving the post-sport journey from an evidenced-based approach. In other words, we want to use the existing literature to drive the support resources offered to athletes at all phases of their experience, but we also want to better develop the scientific evidence that speaks to the best approaches and the important variables to focus on.

Can you preview some of the preliminary findings from this topic, and/or how the project is progressing?

The most I can say right now is that GSI has assembled an incredible team of collaborators to tackle this challenge and we have some exciting opportunities happening now that will allow us to advance this mission.

Okay, now for a couple of questions that are a little more fun: favorite athlete or sports moment of all-time?

My favorite sports moment of all time has to be Katherine Switzer running the Boston Marathon in 1967. She was the first woman to register and run with a bib and was only allowed in because she registered with her first initial. The rage expressed by the male race official who tried to physically force her off the course is a reminder of how deeply misogyny ran in American society. It wasn’t just about running or athletics, it was a moment in history and the fight for equality.

I am all about Arizona teams and I am a Sun Devil to the core. However, nothing gets me fired up like the Army/Navy football game. #BeatNavy 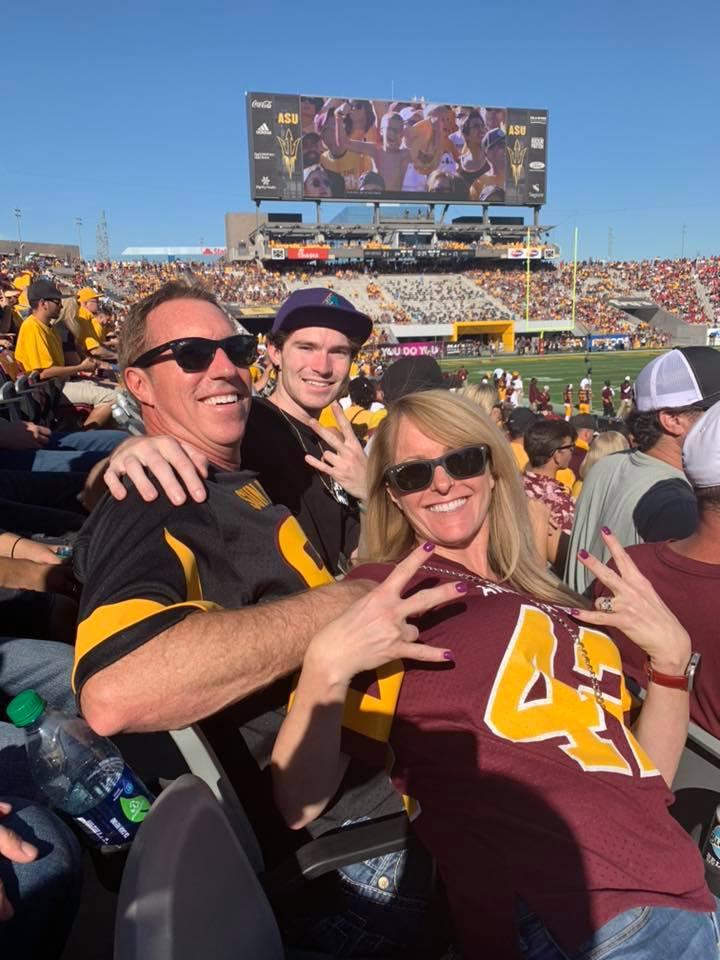 Karen photographed with her family, cheering on the ASU Sun Devil Football team.

If you could tell people one thing about the topic of our research and why they should care, what would it be?
Our research seeks solutions for improving post-sport and post-service well-being that can translate across populations to address challenges associated with concussion care, return to school, second career pursuit, and other life challenges we all face.

Dr. Gallagher's dissertation work and subsequent publications and presentations have focused on military service-related conditions, including mild traumatic brain injury, and military-to-civilian transition and their impact on higher-order cognitive processes. She was named a Pat Tillman Scholar in 2016.

She has presented her work at international and national conferences, including the American Speech-Language Hearing Association, International Neuropsychological Society, Defense Centers of Excellence, and the International Cognitive-Communication Disorders Conference. She has published in peer-reviewed scientific journals and has been featured in multiple news and feature stories by a variety of media outlets, including Fox Sports. She has taught graduate courses in Traumatic Brain Injury and Motor Speech Disorders.

Dr. Gallagher is a U.S. Army Airborne Gulf War 1 veteran where she deployed with the 35th Signal Brigade as a chemical specialist.

To learn more about Dr. Gallagher, check out her most recent opinion pieces on the recent intersection of sport & patriotism and the implementation of Army’s new combat fitness test