Masculinity, Identity, and Moving Forward: I am Michael Sam

Michael Sam, the first openly LGBTQIA+ athlete drafted by the NFL, opens up about his story, masculinity, and defining oneself in the 21st century.
June 4, 2019 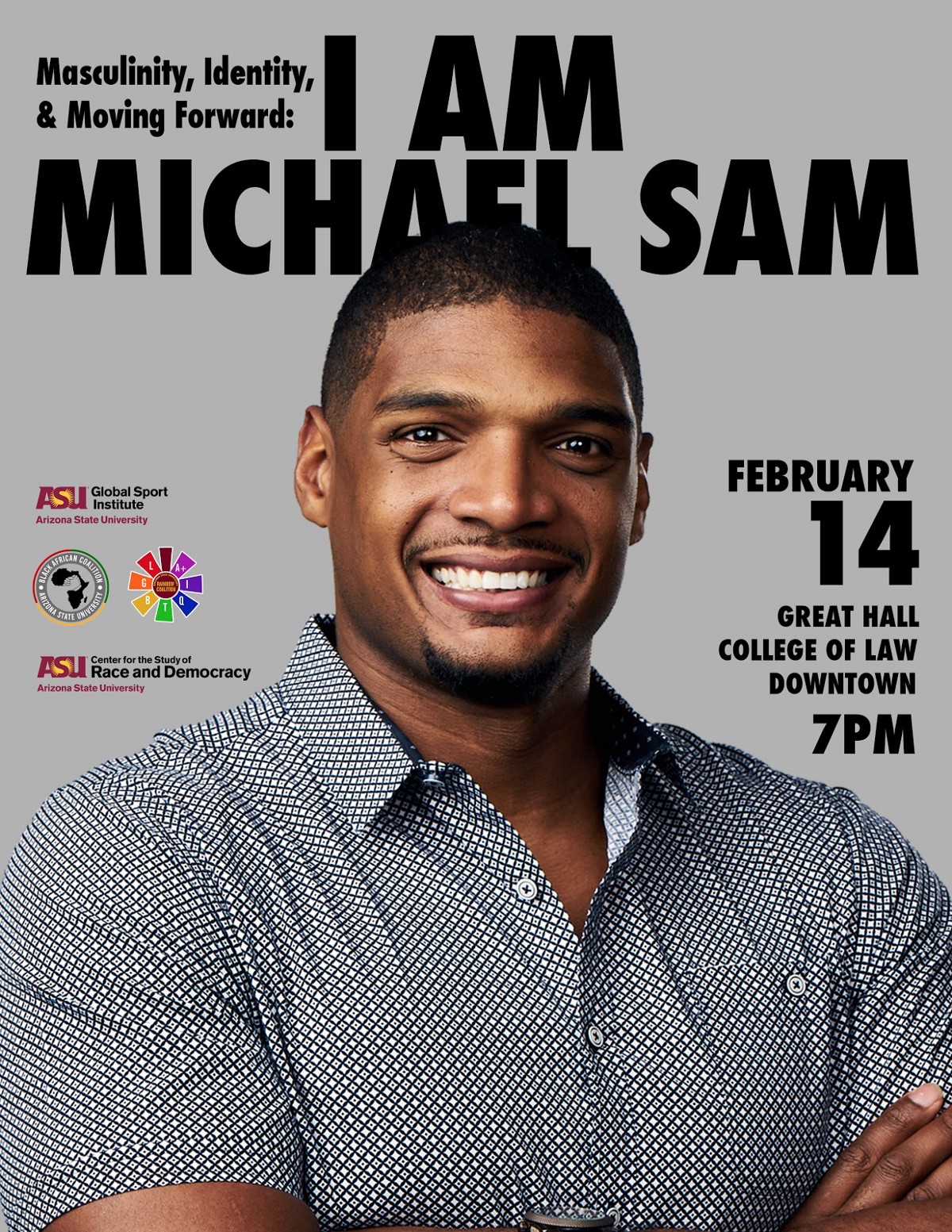 The promotional poster for Michael Sam’s speaking event at the ASU Downtown campus.

Having come off of a successful career at the University of Missouri as SEC Defensive Player of the Year, Michael Sam made headlines before the NFL Draft by coming out publicly. The news dominated mainstream media all the way until Draft Day, where he was selected in the 7th round of the 2014 NFL Draft by the St. Louis Rams. This made him the first openly-LGBTQ player to be drafted in any major American sport, thus breaking barriers in an industry often characterized by its masculinity. The journey which followed his announcement wasn’t easy by any means, but it was a transformative process stemming from his initial leap of courage to share with the world his sexuality. The Global Sport Institute was able to help amplify his story and experience to the public by partnering with the ASU Rainbow Coalition and ASU Black African Coalition for a special event on the University’s downtown Phoenix campus titled, “Masculinity, Identity, & Moving Forward: I Am Michael Sam.” 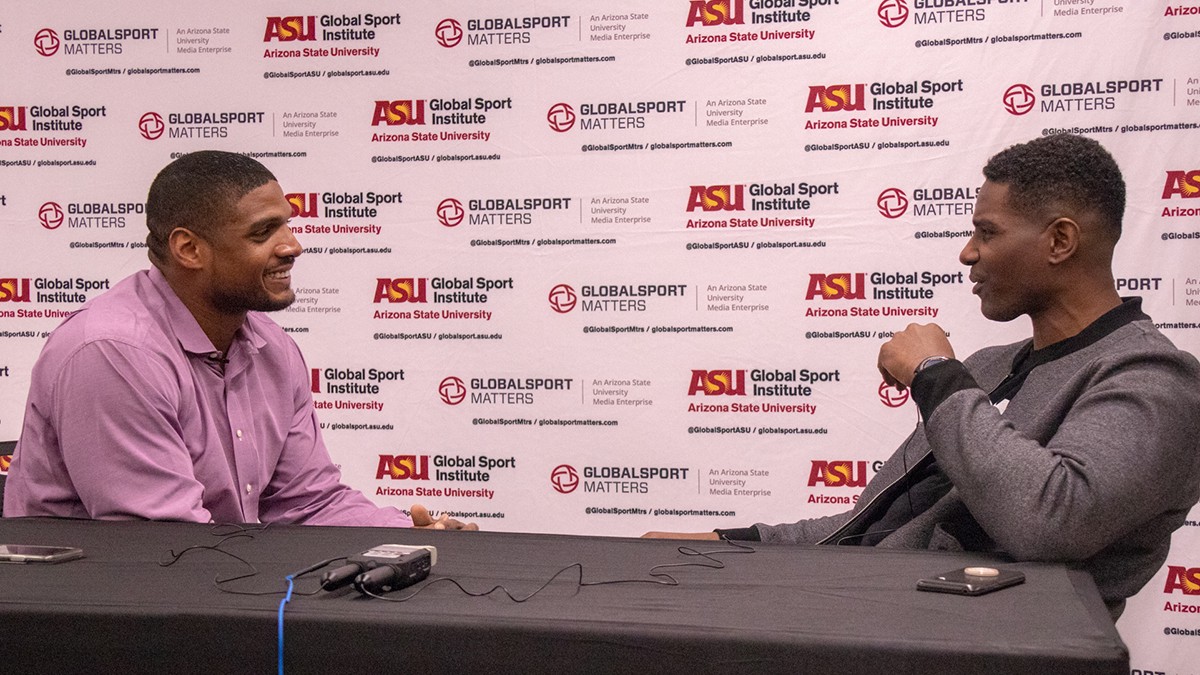 Before speaking to the public, Michael had a chance to meet with some of the student leaders from campus for a more intimately formatted conversation, where he answered any questions they had. Our Director of Research, Dr. Scott Brooks, also had the opportunity to sit down and have a one-on-one conversation with Michael where they discussed both their common thread of having spent time at Mizzou, and what they each encountered there. The full interview can be heard on GlobalSport Matters. 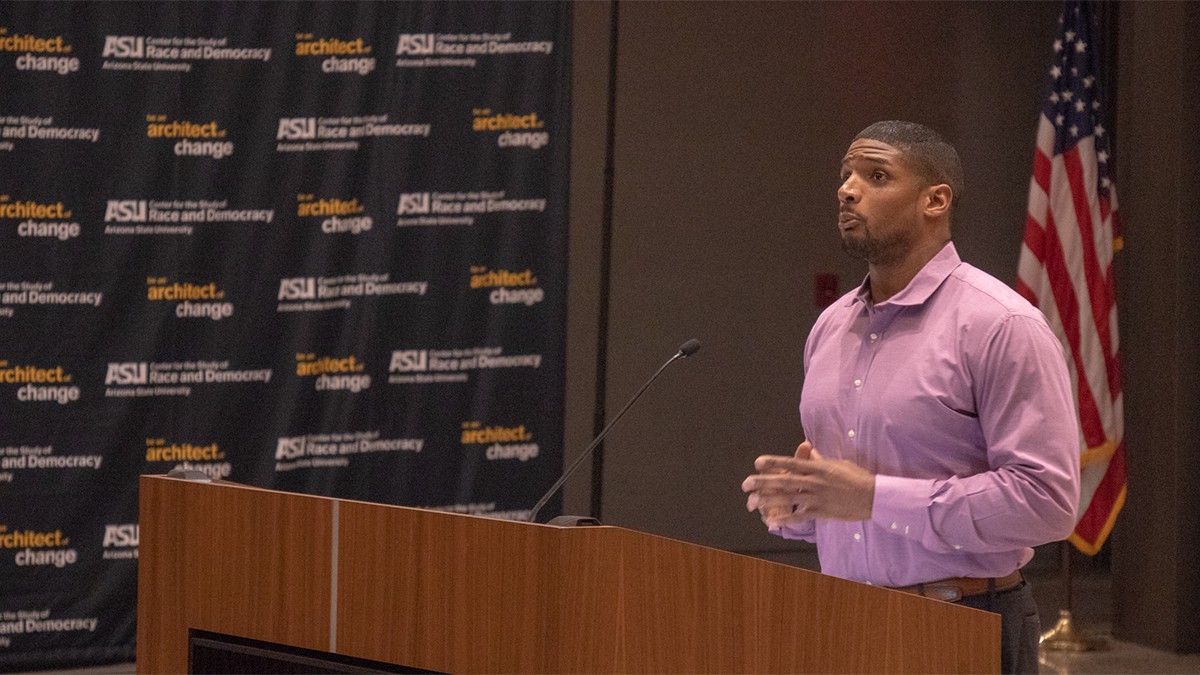 After his conversation with GlobalSport Matters and the student leaders from ASU Downtown, Sam addressed the larger event, going over his journey that followed his coming out. He iterated how his career might have been different if he had chosen not to come out before the draft and emphasized how the media would exclusively cover his sexuality, but not his accolades as a player. His stint in the NFL was short-lived, and he spoke about how his life took a dark turn after he left the Canadian Football League to move to Los Angeles. Despite the issues he faced, he came back stronger than ever, with a larger-than-life personality, and stood before a crowd of LGBTQ supporters to tell them one simple piece of advice:

“You can’t let what society thinks about you affect you…just be you.”

You can read the full GlobalSport Matters’ article, along with more excerpts from Michael Sam’s speech on globalsportmatters.com.