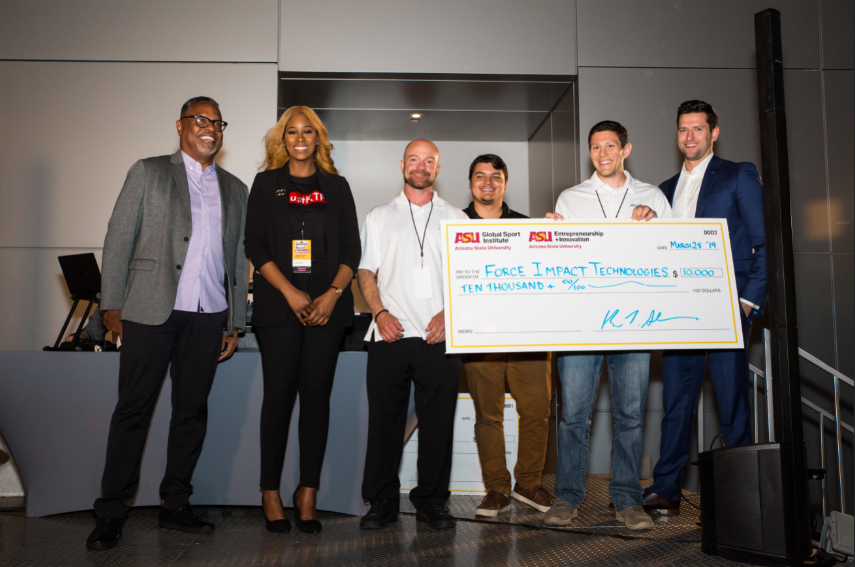 Each year, we invite the top ventures from our Spring and Fall Demo Day sessions to perform a live pitch at the Global Sport Summit and compete for additional funds and other various prizes. Ventures range in areas of the sports industry and each is given an opportunity to gain meaningful funding to bring their idea to the next level. Because COVID-19 prevents an in-person pitch event, we will be hosting this year's Spring Pitch Competition virtually with a set of judges ready to award the next top ventures.

We will hold a closed Q&A session on Monday, April 13th with judges and ventures and announce winners by Tuesday, April 14th.

Professor Shropshire is CEO of the Global Sport Institute and the adidas Distinguished Professor of Global Sport at Arizona State University after a thirty-year career as an endowed full professor at the Wharton School of the University of Pennsylvania. Shropshire's career has been highlighted by leading the launch of several noteworthy ventures in a variety of sectors including: leading the boxing competition during the last profitable Olympic Games, which was also the most televised event of the Games in 1984; founding and leading the Wharton Sports Business Initiative, one of the world’s most respected sports business think tanks in 2004; serving as a founder and board member of the Valley Green Bank, which was sold to Univest Corp. for $76 million in 2014; and guiding the launch of the non-profit Ross Initiative in Sports for Equality (RISE) in 2016 and serving on its board. As a sports-industry leader he is former President of the Sports Lawyers Association, the largest such organization in the world, and also former Program Chair of the ABA Forum Committee, Sports Law Section. His views and insights on the sports industry can be heard via his “Why Sport Matters” podcast. He is an author, educator and speaker consulting on athlete-transition and financial education and has worked with NCAA, Major League Baseball, National Football League, National Football League Players Association, the United States Olympic Committee and PGA golfer Rory McIlroy.

Jake the Snake was a 10-year vet and Pro Bowl quarterback in the NFL (Arizona Cardinals and Denver Broncos). He is known for his All-American season and run to the Rose Bowl while at Arizona State, winning the Cardinals’ first playoff game since 1947, and breaking John Elway’s franchise records, while taking the Broncos to the AFC Championship Game in 2005.  In December, Jake was inducted into the College Football Hall of Fame. Since retirement, Jake has pursued entrepreneurship and launched the business venture, ReadyList Sports.

Justin is a former NFL running back and now a successful entrepreneur. He played 9 years in the NFL with the Seattle Seahawks, Indianapolis Colts, Houston Texans, Jacksonville Jaguars, Baltimore Ravens, Detroit Lions, and Denver Broncos.

Since then, Justin has become an entrepreneur and the founder / CEO of Hustle Clean, which has been featured on Shark Tank, Fox, CBS, NBC and Cheddar. The Company’s products, including an on-the-go Shower Collection called ShowerPill which consist of a novel body wipe proven to kill 99.9 percent of germs, have taken off with availability at over 1,000 locations including Target, Crunch Fitness, Pharmaca, and UFC Gyms. Investors and advisors include many professional athletes including Jonathan Stewart, Steve Smith Sr., Ronnie Lott, Kyle Juszczyk and Prince Amukamara.

Tracy Lea serves Entrepreneurship + Innovation as Assistant Director, Venture Development. In her role, she co-leads the ASU Venture Devils program around the three pillars of support which include the mentor, funding and spaces network to nearly 300 student, faculty, community and alumni startups, including the prestigious Edson Student Entrepreneur Initiative.  Edson teams have raised over $15 million in external funding the past several years and have filed over 40 patents.  As part of the Venture Devils program, Tracy manages over 50 Venture Mentors designated as faculty associates to leverage their entrepreneurial expertise to further the ventures they serve.  Drawing on her military background Tracy spearheads the group's military, defense and veteran initiatives designed to elevate the imprint of veteran entrepreneurs. In addition, she teaches Entrepreneurship and Value Creation to both engineering and business students at ASU.