Can Sport Save Globalization? A Conversation w/ Andres Martinez 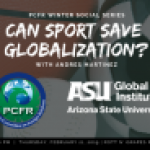 Almost everywhere you look, globalization appears to be in full retreat, derailed by tribalism, protectionism, nationalism, the reassertion of boundaries, and even an elitist progressive craving for all things locally-sourced.

Almost everywhere. Sport, of all things, is an important exception, the globalist’s improbable final beachhead. It’s important ground to hold. Sports are a form of global popular culture that influence how millions of people around the world connect to each other, situate themselves in the world, and self-identify.

Take soccer, which has made tremendous inroads in the USA. Can globalists here take solace in the fact that today’s kids represent the first generation whose worldview as sports fans extends beyond our shores? Similarly, in a Brexit-rattled Britain, does the stunning globalization of the English Premier League point the way to an alternative future? Stepping away from soccer, might the engagement of the NFL with Mexico and the NBA with China prove a powerful countervailing form of public diplomacy, independent of our government?

Andrés Martinez is a special advisor to ASU President Michael Crow, a professor of practice in the Cronkite School and the editorial director of Future Tense, a Washington, D.C.-based ideas journalism partnership between ASU, Slate magazine, and New America.

Martinez is focused on building media and research partnerships for ASU in both Mexico and Washington. He writes and speaks often on international economic issues and sports, and the link between both topics. He is currently working on a book project focused on the globalization of the English Premier League, and other sports leagues. Martinez is a director of the Arizona-Mexico Commission, and has also been the editorial director and executive editor of ASU-affiliated Zócalo Public Square in Los Angeles.

Mr. Martinez is a frequent contributor to Global Sport Matters and was a Global Sport Institute 2017-18 Seed Grant recepient. He was awarded for his work in writing a book on the Globalization of the English Premier League. https://globalsport.asu.edu/grant-recipient/andres-martinez-premier-league-and-globalizations-contradictions