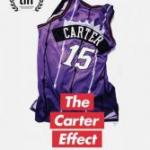 The Global Sport Institute and GlobalSport Matters hosted a screening  of: The Carter Effect. Sean Menard gives viewers an unprecedented look at Vince Carter: the six-foot-six, eight-time NBA All-Star from Daytona Beach who made waves in the Canadian basketball scene when he joined the Raptors in 1998.

This galvanizing documentary chronicles the rise of the Toronto Raptors and the pivotal role of basketball superstar Vince Carter in building the team’s notoriety and planting Toronto firmly on the world’s pop-culture map. The Carter Effect captures the thrill of the game, the complexity of the industry, and the intoxicating mix of athletics, civic pride, music, and surging diversity that make Toronto the entirely unique city that it’s become.

At the core of the film is an interview with the charismatic Carter himself, who speaks with insight and candor about his career and involvement with the Raptors. The legendary 2000 NBA Slam Dunk contest, the relationship between Carter and Tracy McGrady, the gut-wrenching drama of Carter’s departure from Toronto, and the recent, gratifying steps toward reconciliation.